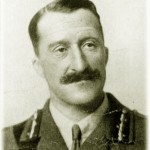 After leaving Worksop College, Ivor attended Goldsmiths College, London and the Royal Academy of Arts. In 1971 he was commissioned to sculpt the full-length statue of Winston Churchill which now stands in Parliament Square, London.

He is also well-known for his sculpted heads of notable people such as Yehudi Menuhin and George Thomas.